The Army will tell you they don’t do CAS, but if you were an AH-6 Little Bird pilot, that’s all you did.  Jim Hosey serves as Blue Air Training’s Chief Helicopter Pilot and works with Blue Air Training’s Pensacola team as a DETCO in preparing for upcoming exercise.  Qualified as a pilot in both rotary and fixed wing aircraft as well as Mission Systems Operator (MSO) duties, Jim serves as a CAS SME and MSO instructor.  As a helicopter certified flight instructor, he helped Blue Air Training establish its rotary wing CAS Tactics, Techniques, and Procedures, Stan-Eval program, and MSO syllabus of instruction.  Jim is also an instructor pilot in the A-90 and IAR-823.

Jim’s SOF background as an Army Ranger has been critical in helping Blue Air Training bring solutions to clients’ expressed need for improved rotary wing CAS training.  Jim began his career as a plank holder rifleman and eventually a squad leader in the 3/75th Ranger Battalion. He then went on to fly AH-64 Apaches for a short time before becoming an AH-6 Little Bird pilot for the 1/160th SOAR where he spent the last 16 years of his military career.

With 5000 hours of flight time, including an impressive 360 combat hours, Jim retired with a Distinguished Flying Cross and twelve air medals–three with a Valor device.

As a retired Ranger, Jim knows why CAS JTAC training can make all the difference and how to provide that training in the best way possible.  He takes pride in being part of a team that places an emphasis on consulting with instructors and troops to provide the most current and correct TTPs that are responsive to the emergent needs of troops in theater.

Hailing from rural Connecticut, Jim now resides in Kentucky and enjoys the outdoors from his lakeside home that he shares with his wife and three children.  When he’s not flying for Blue Air Training, you can find him chasing the clouds in his YAK 52. 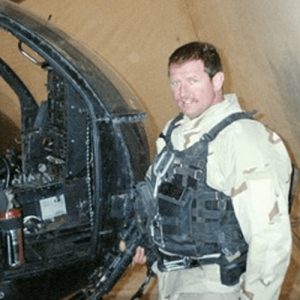